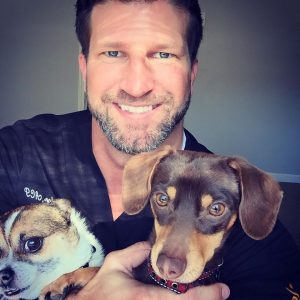 Dr. Taylor was born and raised in Southern California where he was an All-League middle linebacker and captain of the State Champion Trabuco Hills Mustangs football team. He attended Columbia University in New York City where he was an All-Ivy League, All-Decade middle linebacker and Co-Captain his senior year. He and the 1996 team were inducted into the Columbia University Hall of Fame in 2015.

​While in college, Dr. Taylor used to be in the athletic trainers room daily doing ice and stem with very little relief. He began his pursuit of Chiropractic Medicine after suffering a low back injury in 2007. After only getting temporary relief from medication and physical therapy, he saw a chiropractor for the first time. Instead of just trying to fix the symptoms, she showed him how his previous sports injuries had caused his body to compensate leading to his current condition. After restoring function and range of motion to these other areas, Dr. Taylor noticed lasting relief and increased performance in all his athletic endeavors.As a higher level athlete with more than a few serious traumatic injuries, he was amazed at how much better he felt even after dealing with these injuries for years.

He vowed that he would get the word out and after a successful career as an IT Consultant, he decided to go back to school to become a chiropractor. He attended Parker University where he graduated Cum Laude in 2010 with his Doctor of Chiropractic degree, a B.S. in Anatomy, and a B.S. in Health & Wellness, He was a member of the Student Senate Cabinet helping improve the IT experience for the students. Dr. Taylor was part of the Student American Chiropractic Association as become one of it’s leaders fighting for Active Duty Military and Veterans to have greater access to Chiropractic.

Doctor Taylor has dedicated himself to the study of the human body. He is certified by the National Academy of Sports Medicine as a Corrective Exercise Specialist. He was certified in Active Release Technique in 2011 and Rocktape Functional Taping. He worked for one of the top myofascial therapy companies in Texas for 6 years, He has studied movement assessments by Gray Cook and movement impairment syndromes by Julie Sahrmann. His main areas of focus are myofascial therapy, corrective rehabilitation, spinal adjustments, joint mobilization and kinesiology taping (the same protocols used by the US Olympic Team). He has worked with a myriad of different types of patients from your typical office worker to UFC fighters, Crossfitters, Gymnasts, Classical and Modern Dancers, Golfers, Collegiate and NFL Football players, Minor and Major League Baseball players.

Dr. Taylor is a fan of all things Texas, but most importantly the TCU Frogs, Texas Rangers and the Dallas Cowboys. In his free time, he enjoys CrossFit, wakeboarding, sand volleyball, traveling, and playing with his two dogs Krull and Thor.

We will do our best to accommodate your busy schedule. Request an appointment today!